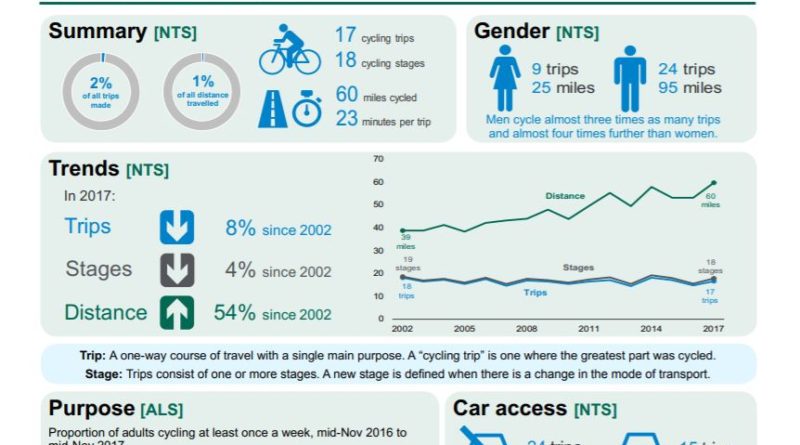 New cycling figures released today by the Department for Transport demonstrate how vulnerable road users are being let down by infrastructure deemed to be “too dangerous”.

Painting a stagnant picture of cycling rates, which have remained relatively flat over the past 15 years, 96% of local authorities reported that less than 20% of their adult population cycled at least once a week. 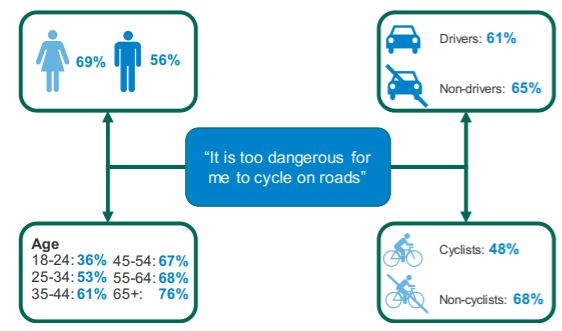 The primary reason for this flat trend is fear of cycling on the roads. Some 62% of adults in England believe the conditions to be “too dangerous”, with that figure rising to 69% of women. The trend to feel vulnerable on the road also ramps up with age.

Even among those who do cycle, 48% believe the roads to be inherently dangerous for everyday journeys.

The averages for 2017 were 17 cycling trips per year and 60 miles cycled per year, per person.

The most common reasons cited for cycling trips were for commuting and business at 37% of journeys. Cycling for leisure accounted for 36%.

Rounding out the remainder, riding to school continues to lag, again due in part to safety concerns. Just 10% of trips were cycled to educational facilities and at just north of 5% of the distance covered.

The number of trips, however, is flat, just shy of one a day at 332 in 2017. According to the British Social Attitudes Survey, around 38% agreed with a statement saying they would cycle journeys of 2 miles or less.

Duncan Dollimore, Cycling UK’s Head of Campaigns, said: “The Government has just closed its consultation on cycle and pedestrian safety, and now we need them to urgently publish their findings and take immediate action.

“Its own statistics published today show that 60 per cent of adults admit they feel it’s too dangerous to cycle on the road, and in particular women and older people are put off cycling by those fears.

“Although cycling is statistically much safer than many people think, it’s clear the Government has to address the key issues of infrastructure, such as improving roads and cycle lanes, and making sure our traffic laws operate effectively to promote road safety for everyone.”

Of local authorities that did post promising figures, Exeter, Worcestershire, South Cambridgeshire, Tauton Deane and the Isle of Wight were highlighted in the data.

The UK’s chief medical officer has recommended building active travel into people’s lifestyles, recommending a minimum of 150 minutes of physical activity per week.

A wealth of data presents a much larger case for building safe cycling infrastructure, something that has been proven to draw more people to active travel.

Just 1.2% of adults in the UK are said to rely on cycling for leisure to stay active and 0.8% cycle for transport to stay active. 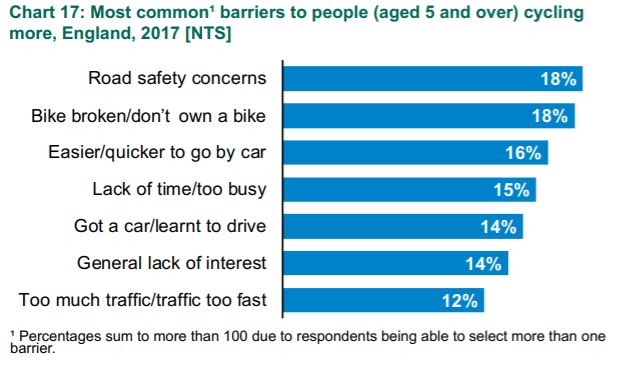 Responding to the Walking and Cycling Statistics Xavier Brice, CEO for Sustrans, the walking and cycling charity, added: “While it is encouraging to see that walking continues to increase at the national and regional level, it is disappointing to see that levels of cycling have not changed nationally or regionally compared to previous years. Cities with well-established cycling cultures such as Cambridge and Oxford unsurprisingly record the highest prevalence for cycling at least once a week.

“The UK Government recommends people build active travel into their daily commute to increase levels of physical activity yet it fails to take bold steps to turn that into reality.

“We urge the UK Government to prioritise the development of safe and high quality walking and cycling routes to enable more people to walk and cycle.” 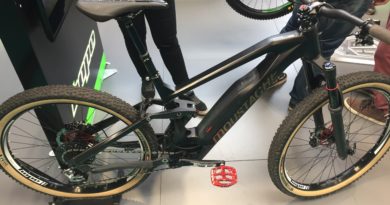