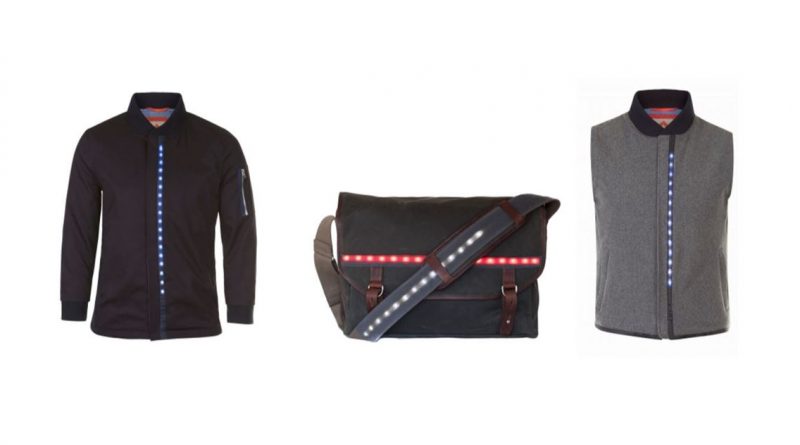 Teased at Eurobike, the Clissold Bomber Jacket, Brixton Messenger Bag and Holloway Gilet are blend-in-by-day garments that won’t stand out as cycle clothing in the street. By night, each garment is clad with a LED strip embedded, which when activated can be seen from 400 metres away.

“Road traffic accidents are twice as likely to result in fatalities in darkness than in daylight, yet less than a third of cyclists wear high-visibility clothing,” says LUMO co-founder, Lucy Bairner. “Why? Because city cyclists dress for their destination as well as their journey, and walking into an office, restaurant or bar looking like a radioactive lemon just doesn’t work!

“For our autumn 2016 collection we have had the benefit of feedback from the hundreds of backers from all over the world that supported our launch campaign. The feedback has been overwhelmingly positive, and one thing that we have been consistently asked for is to make some of our range more affordable. So, having scoured the world to source the best value fabrics and manufacturers, we believe we have found the perfect mix of style, visibility and comfort all for under £100.”

With partner Doug Bairner himself having been knocked off a bike after dark, the brand has set out to create a catalogue of garments that won’t be left at home and that the rider will actively want to wear. Lumo’s last kickstarter raised nearly £75,000 to bring the brand’s first product to market.

Of the brand’s future direction, Doug Bairner said: “We are introducing three new top quality products at more mainstream price points with the aim of increasing our distribution both within the UK and internationally.”

The project is now live and interested customers can head here to pledge.

4 July, 2019 Hayley Everett Comments Off on Discussions around second life possibilities for e-bike batteries to take place at Eurobike