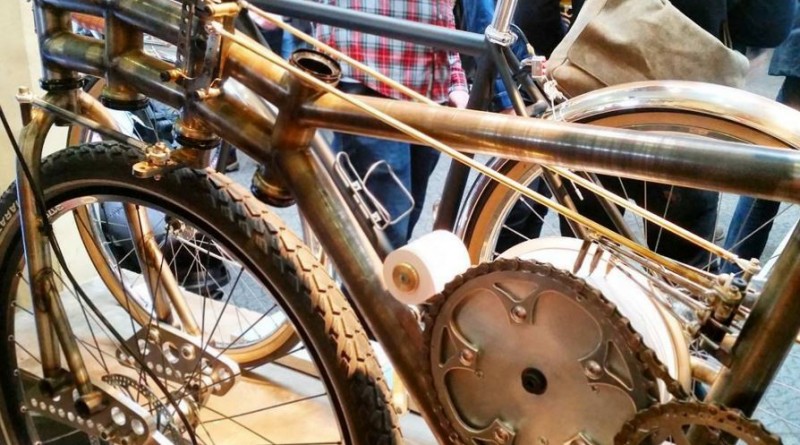 It was perhaps the most snapped build at the Bristol Handmade bike exhibition. Not the prettiest on 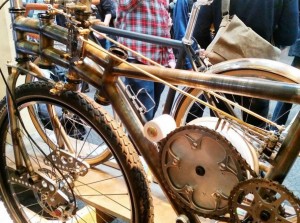 show, but certainly the most curious, Robin Mather’s handbuilt creation sports four head tubes at different increments, each rigged via skinny tubes to three coloured biros, in turn touching down on a reel of paper.

But why?, asked many. Was this simply a Frankenbike designed to draw crowds to Mather’s booth, or is there method to the madness?

“The idea with this build is to answer the fundamental questions of why steering works at varying head angles. Like many before, I found myself accepting that these widely used angles do in fact work, but I wanted a basic understanding of exactly why in order to build better bikes in future,” Mather told CyclingIndustry.News.

“I’m also interested in investigating the effect of altering the polar moment of inertia and centre of mass of the steered assembly.”

Does it have a name?, we hear someone ask. Simply the Adjustable Geometry bike with three channel analogue data recorder. Not the catchiest of names, but it’s the science that’s important here. The four head angles are 64.5, 73, 81.5 and 90 degree, while trail adjustable is in the range of -32mm to 95mm. The red biro tracks steering torque, the black steering angle and the blue lean angle.

Mather’s explanation of the specifics reads: Direct adjustment of the mechanical trail is achieved by keeping the fork offset adjustment horizontal. The four available steering axis intersect at ground level and the connections between the fork and the dropout are arranged on an arc about the same point. This arrangement allows for independent adjustment of head angle and trail.

Measurements are made of steering angle, lean angle and steering torque. Gathering data digitally would certainly be more accurate and efficient, but the bicycle is a simple, mechanical thing and I wanted this investigation to retain that spirit.

“The system i’ve built here allows for analogue recording across each of the four head angles and trail. When steered and pedaled the biros begin to record. I only finished this build a week before the show, so as yet i’ve yet to make any meaningful use of the data, but that’s the long term goal; to crunch the findings into some kind of spreadsheet that will help myself and others understand the fundamental science of steering,” Mather adds. 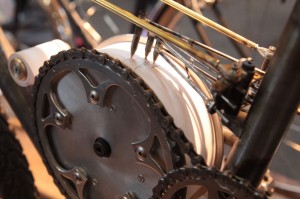 The build came together over a period of six weeks, with drawing and building occurring in tandem as it evolved. Described by as a laborious process compared to digital readings, which Mather admitted may also come into play further down the line, the rig’s results will apparently be most applicable to tarmac going bikes.

“In short, I undertook this project simply because i was aware of my own ignorance. I’ve been building for a long time now using accepted convention, but without complete understanding. As a framebuilder who chips in teachings occasionally at places like The Bicycle Academy it became important to me to further understand what you are feeling in the saddle and why,” concluded Mather.

Robin is a full time builder producing between 30 and 40 frames per year. Those interested in his work can keep up to date on his website here.

Further images of the build detailed here can be seen on the designer’s instagram. 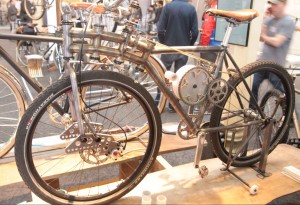 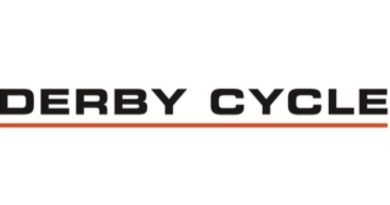 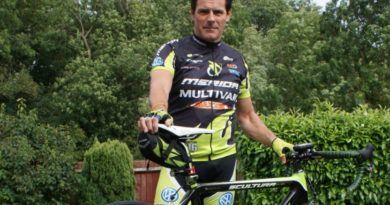