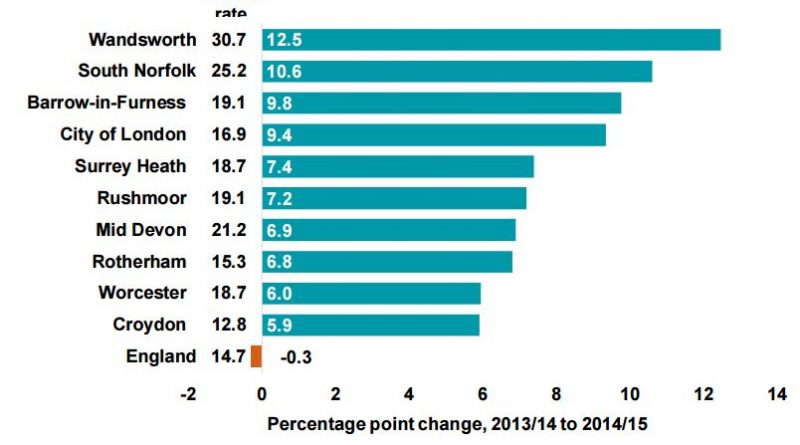 “There has been no statistically significant change in reported cycling prevalence in England overall.”

That’s the conclusion reached by new figures released by the Department for Transport today, which show the gulf in cycle modal share between those regions encouraging cycling and those with little to no support for active travel.

The Local Area Walking and Cycling Statistics report details active travel habits between 2014 and 2015, revealing that across England as a whole there has been a 0.3% decline in cycling over the 2013/14 analysis.

Based on results of the Active People Survey, an annual Sport England telephone survey, the regional breakdown unsurprisingly shows regions such as Oxford and Cambridge topping the pile, with 43.2 and 58% of citizens traveling by bike once a month.

There are, however, reason to be cheerful, with the emergence of numerous new strongholds for cycling. Most notably Wandsworth and the City of London – both beneficiaries of new cycling infrastructure – have spiked 12.5 and 9.4% year-on-year when it comes to bicycle use.

15% of adults in England cycled at least once a month in 2014/15, similar to previous years. Other local authorities, including South Norfolk and Barrow-in-Furness, also had large annual increases.

Equivalent to 6.5 million people, that 15% cycled at least once a month for any purpose. When it comes to utility cycling, that figure drops down to 6.5% cycling once a month, with just 1.5% cycling five times a week. 2.6% cycled around 3 times weekly and 4.5% once a week.

When it comes to recreation, the figures paint a picture of an avid core of enthusiasts, with 0.6% cycling five times a week for fun. 10% cycled recreationally once per month and 5.4% once per week.

Cycling advocates will notice a trend when it comes to the regional breakdown, with the top five regions for cycling revealed to be Cambridge, Oxford, York, Richmond Upon Thames and Wandsworth, with a 58% to 30.7% range in respondents saying they had cycled in the past month. Leading the pack, the top three are known for high student populations and city centres known to be unfriendly to cars. Cambridge, for example, has designed out the car with a park and ride system that promotes both public transport and cycle use with connected and often segregated infrastructure along key arteries into the city. 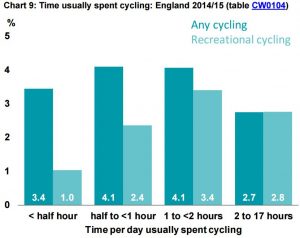 Wandsworth, which in recent times has come to benefit from access to Cycle Superhighway 7 and 8 – connecting Merton and the city, as well as Wandsworth and Westminster – saw the largest year on year rise, jumping 18 to 31% when it comes to adults cycling once per month.

Often criticised for not doing enough to encourage women to cycle, the DfT stats do paint a picture of a demographic divide. Overall, men are twice as likely to cycle than women, with the divide the narrowing slightly between the 25 to 34 age group. 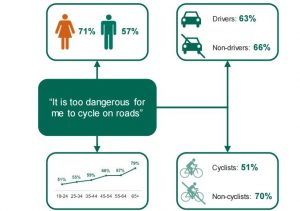 It is safety concerns that put a huge swathe of the British public off cycling, with 71% of women and 57% of men stating “it’s too dangerous to cycle on the road”.

Road safety stats put things into context a little, with 2015 gladly posting the lowest number of cyclists killed on the road on record at 100. Since 2008, the range has sat between 100 and 118 people have losing their lives on the roads while cycling.

In 2015, 1,732 people were killed on the roads in England and historically car occupants have always represented the greatest percentage, as you might expect given they are the biggest road user by some margin. 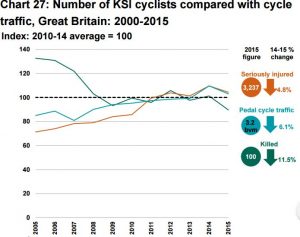 During 2015, 44% of road deaths claimed car occupants, with cyclists representing a disproportionately high 6%. Four times more pedestrians than cyclists were killed on the roads, making them by far the most vulnerable road user by ratio.

Despite carrying only 33% of cycle traffic, nearly half (49%) of cyclist deaths occur on rural roads. 81% of cycling casualties happen on urban roads.

So what opportunities does the report highlight for the bike shop? In England, 42% of people aged over 5 own a bicycle. Bicycle ownership is most prevalent among people aged under 17 years old. Among adults, bike ownership peaks at ages 40-49 with 51% owning or having access to a bicycle.

You can catch the full report document here.

This article has now been added to our Cycling Advocacy Resource – a library of information for use by the cycling campaigner when building a case for active travel in their region. 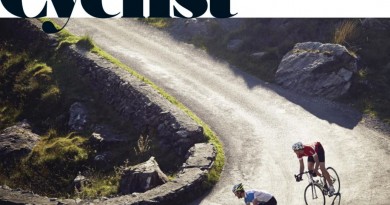 13 May, 2016 Mark Sutton Comments Off on Bikes ETC and Cyclist publisher cleans up at British Media Awards 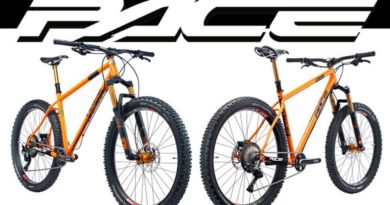 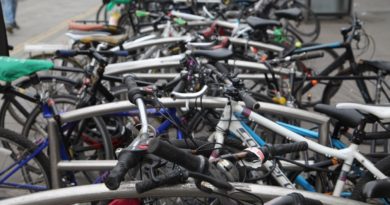