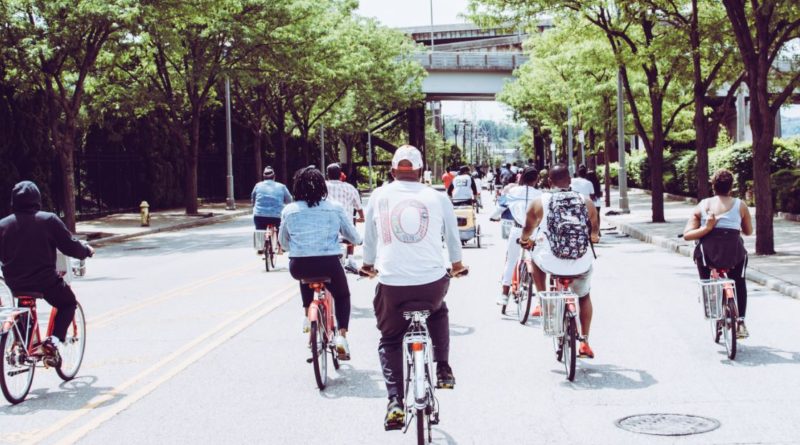 How much is the cycling industry worth? This is perhaps the most commonly asked question for any business seeking to plan an entry or create a business plan, but likewise it is an important political lever on which to place some verifiable weight. Of course you have market reports from trade mags and industry associations, but reading between the lines, just how big an engine does the cycle market have?

Every now and then CI.N stumbles across a stat that, while jaw-dropping, won’t stack up on its own for an article. Here are just a handful that demonstrate well that the cycling market and its indirect benefits add up to a home run investment in economic terms and are likewise creating a marketplace where opportunity exists.

The UK cycling industry worth in context
By the latest valuation of the cycling industry (Source BAGB, 2018) our industry is worth £5.4 billion to the UK and is one of few growth industries in the context of the Covid-19 outbreak. The same dataset showed the industry to be in some from responsible for 64,000 jobs.

On the paper, the BA’s Steve Garidis told CI.N in October: “My view is that this paper is still pretty current although with the recent boom you can assume that the value has increased. It was always a very conservative estimate in any case, based on as few ‘economist’s assumptions’ as possible.  The paper notes that real values are likely to be quite a bit higher.”

Peloton is now worth more than Ford
Arguably this relates equally to the relatively youthful e-Sports industry as well as the cycling industry, though it is notable that there is a sudden a scramble to throw cash at businesses whose roots are firmly in cycling. Take Zwift and Wattbike, for recent examples of similar firms now soaring in value as people take to indoor cycling. 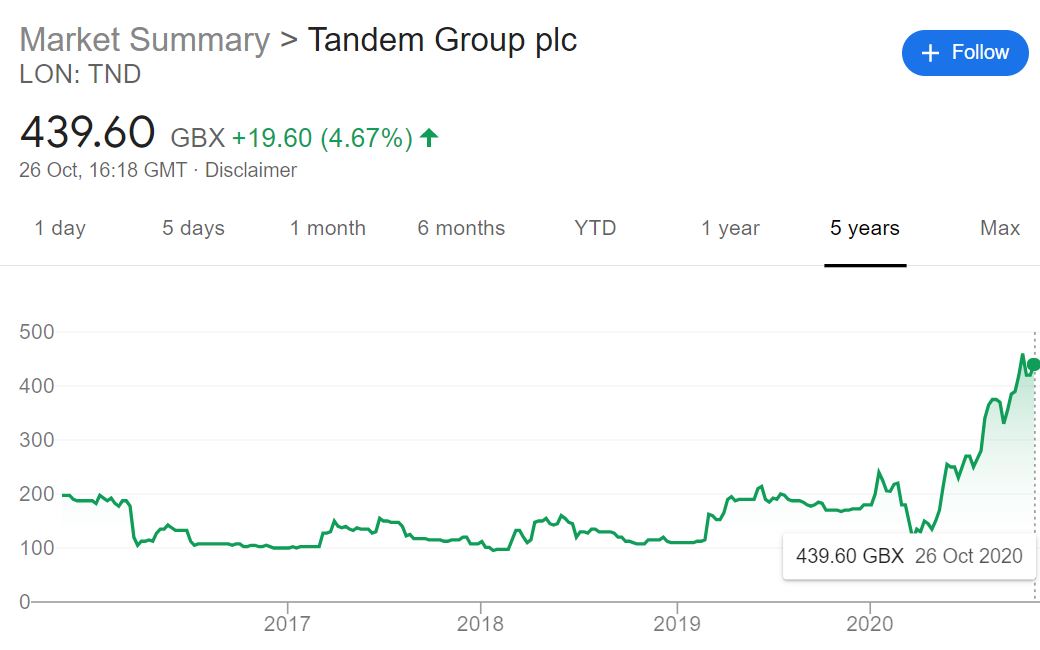 What is truly startling, however, is that since its IPO at the start of 2019, Peloton has soared in value in a parabolic rally that has taken its market cap to just shy of $40 billion. For context, the static bicycle business is now worth $10 billion more than the 117 year-old Ford Motor Company which has been in retreat since 2014, having hit an all time high much earlier in 1999.

That pattern is well reflected elsewhere in the cycling industry, with stocks attached to cycling largely all settling north (some significantly) ahead of pre-Covid crash levels

Pictured right is the trajectory of UK-based Tandem Group, which though diversified across a number of sectors, has surged to 20-year highs as investors acknowledge cycling’s likely role in a post-covid world. Likewise, having hit record lows in March, Halfords is now trading back in line with its 2019 average.

For a guide to last year’s stock market bulls in the cycling industry, check in here. 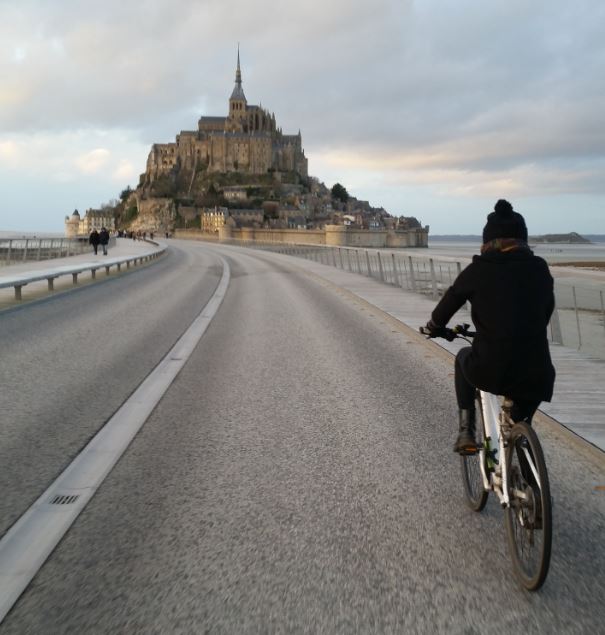 Cycle tourism beats value of cruise industry
Back in 2016 an incredible stat came out when Burkhard Stork addressed the Velo City Conference in Taipei and that is the revelation that cycle tourism makes up 10% of Germany’s entire tourism taking.

A number of other indicators were flashing at the time suggesting that cycle tourism was worth more economically than many dare dream. One of these is the the ECF‘s calculation of the market across Europe, which references data from 2012 showing cycle tourism to be worth €44 billion, versus the cruise industry’s €38 billion. It should be stressed that this data is dated and with Covid slowing the cruise industry to a halt and igniting cycling staycations the gap in valuation can reasonably be expected to have widened dramatically.

In Scotland, where investment has been made to bolster the foundations of cycle tourism, the market is said to be worth over £239 million annually. As far as interest over time goes, social media giant Pinterest notes that searches for bike tours rose 142% in 2017.

Cycle lanes and retail
Where cycle parking exists, a 2016 Raje and Saffrey study that found that as much as five-fold the retail spend can be achieved per square metre versus car parking, much thanks to the footprint vehicles take up.

With freedom of movement enabled and less hassle finding a place to park, Transport for London has further found that people who walk make 16 visits per month and cyclists 12 to shopping districts. Those who drove visited just 8 times.

Within the DfT’s Cycling and Walking Strategy document it is noted that the installation of cycle lanes benefit nearby retail footfall by up to 40%. This is based on research carried out by Matthew Carmona of University College London’s Bartlett School of Planning. The findings were drawn by studying areas of London that have been converted to be more akin to Holland than the UK. Where such conditions existed, people were found to linger, increasing their retail activity by as much as 216%.

The DfT has also acknowledged in its ‘the value of cycling’ document that those coming in to urban spaces by bike tend to spend 9% more than those arriving in cars.

The knock-on effect of that is a boon for landlords, with retail rental values said to have increased on such streets by 7.5%, while the retailers themselves began to grow in number; vacancies fell by 17%.

There are now numerous studies that show that society reaps the rewards of greater cycling levels. Within the DfT’s own literature on cycling’s contribution to the public purse the return on investment has hit highs of 35 to 1, though tends to range between 5 to 1 and 19 to 1.

Now over in Denmark a new study commissioned by the Government has surprised the Minister for Transport. Researchers discovered that, all things considered, for every kilometre cycled society saves 8 krona (£0.70 pence), thus delivering a net positive effect to the public purse. The reasoning attached concludes that, with exercise linked to a vast reduction in health complication, the burden on the taxpayer is actually no burden at all.

It is only with the cancelation of the planned June Grand Départ of the Tour de France that analysts started to grow concerned about how cancelation of the racing calendar staple could effect France’s economy. VeloNews quotes Jean-Francois Mignot at the French National Centre for Scientific Research as saying “Cancelation opens the door to a possible economic meltdown in the cycling sector.”

Luckily a revised race did proceed, though with the absence of much of the estimated 12 million fans who normally physically attend. It is the sums attached to pro cycling that most put the race’s future at risk should it not go ahead, however. With team budgets attached to sponsorships now worth around €20 million in many cases there’s serious money involved for teams. The prize money was worth €2.3 million in total for the 2019 race.

The picture is yet larger, however. The flagship race is said to be worth anywhere between €50 to €130 million in revenue for the Amaury Sport Organisation, with up to 55% of that coming television deals, 40% from sponsors and the remainder contributions from host regions who benefit economically from the tourism and hospitality attached.

Closer to home the economic impact of a race like the Tour de Yorkshire in 2018 was pinned at £98 million, with spend rising 54% against the 2017 event. 2.6 million spectators lined the route over four days of racing, prompting accommodation spend to rise 49% and non-accommodation items such as food and drink, souvenirs and transport was by 58%.

For an up to date insight on the worth and direction of the UK bike shop market in particular you can express your interest in CyclingIndustry.News’ own annual market study here. A further library of data illustrating the economic worth of the cycling industry can be found here. 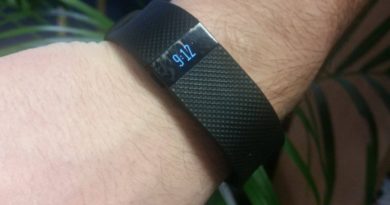 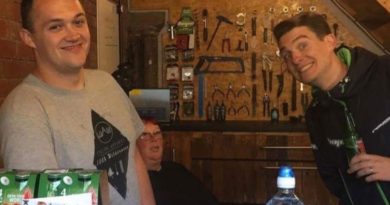 Rad Bike Shack opens doors to out of hours cyclists

16 August, 2017 Mark Sutton Comments Off on Rad Bike Shack opens doors to out of hours cyclists 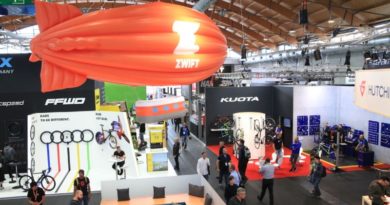 26 June, 2020 Hayley Everett Comments Off on Eurobike Special given final go-ahead by authorities