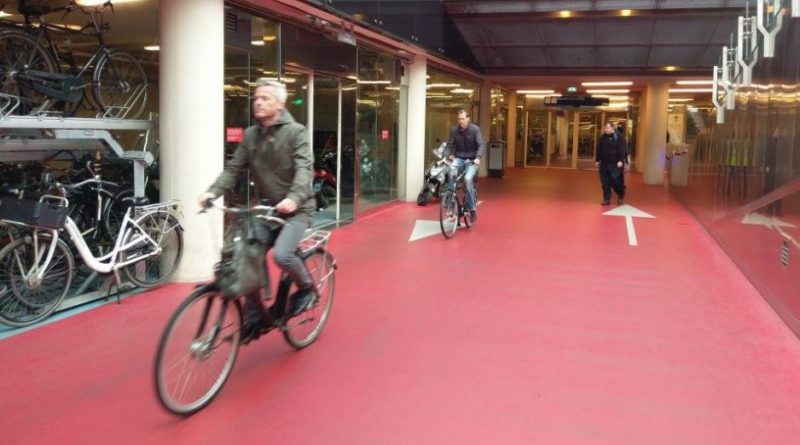 It seems not so long ago we (well, you on the front line of bike retail) were worrying primarily about the internet’s impact on sales. “X brand is discounted and the product’s only just come to market” being the ubiquitous complaint heard almost the world over.

In time, while frequently resurfacing, shop managers have come to terms with the problem facing them and developed strategies to cope with our industry’s rampant discount culture. There is, after all, nothing quite like personal service and bike retail has as such shifted to place greater emphasis on the service model.

While our columnists frequently discuss methods to counter the internet shopper’s bargain driven buying behaviour, changing shopping habits represent just a fraction of the pains being felt by an industry that is generally accepted to be challenging for a presently shrinking pie; unless you’re a specialist in the e-bike business, of course.

In the U.S., a new study by CyclingIndustry.News regular Jay Townley of the Gluskin Townley Group on behalf of the National Bicycle Dealer’s Association has just concluded a shrinkage of 550 stores nationwide over 2010 levels to around 3,700 nationwide – a relatively small amount per square kilometre.

Here in the UK store numbers are shrinking too. A recent survey by CyclingIndustry.News of 74 bike 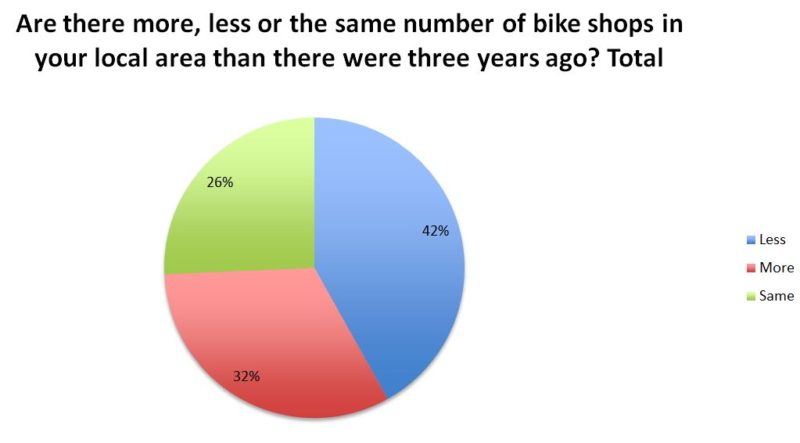 dealers spread across the UK revealed that 42% said their local IBD competition had decreased, while 26% said local shops had remained static.

While we’re still refining our data to pin down the exact figure, the formerly accepted figure of around 3,000 UK bike shops is certainly a lot closer to 2,500 in 2017. Closures have been steady, as have takeovers by both brands and rival bike shops. Though declining, the independent sector is still believed to account for around 35% of bike sales, seconded by Halfords who themselves estimate a 20-25% share.

So what, in 2017, are the next great challenges to the independent sector putting aside those grappled with over the past ten years? 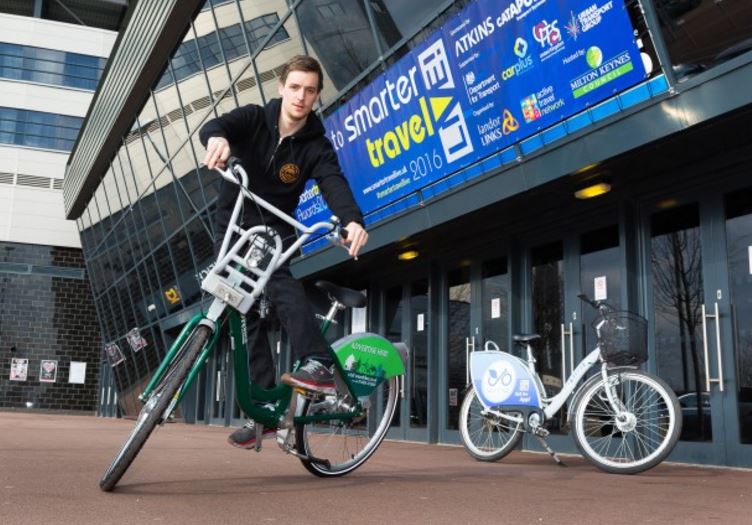 This can of course be seen as an opportunity on a number of fronts. Indeed Oxford’s Bainton Bikes is one such retailer who has taken the bull by the horns, manufactured its own share bikes and rolled out across the county to seize the available business.

Then there’s the argument that bike share users in time become buyers of bike gear. Some do, but the incentives are thinning, as demonstrated on an enormous scale in the far east.

With the prominence of on street bikes dumped on every corner, the incentive to purchase has dwindled, reportedly almost eliminating entry-level and commuter bike sales.

You may have wondered why CI.N has written at length on the bike share world given its supposed limited impact on the day-to-day running of the bike business at large. The simple answer is to try to understand the scale and ridership habits developing the world over.

With schemes now entering the UK, even breaking into territory disputes, there is potentially a very real possibility that bike sales could be similarly impacted, if left unregulated.

Again, both a threat and opportunity to the bicycle retailer, depending on your viewpoint. As revealed earlier, global mobile mechanics businesses are growing at a startling rate. You’ll read within that Velotooler are one such business actively offering their mechanics as hired hands to the bike dealer, potentially useful during busy periods.

Initially bike shops may have seen direct to consumer brands as just another natural progression of online competition. There will always be the workshop business to tidy up. Or will there? The mobile franchises have spotted the opportunity to continue a manufacturer’s seamless delivery to the customer, intercepting the delivery, safety checking and up-selling accessories on the customer’s doorstep. With the van-based mechanic looking to cement a relationship based on convenience with their customer’s speed-dial (read app), the bike shop must also get creative in a bid to retain customers who shop primarily on ease of access.

Meanwhile,  the now JD Sports-owned Go Outdoors spread of the UK tallies at 60 branches and similarly growing. Both have expanded their bike departments to both sell and service a wide range of bikes, spares, components and accessories.

Cycle Republic meanwhile, Halfords’ departure from the ever-present orange into something that feels a little more like your local traditional bike shop, now tallies 15 branches nationwide with two openings in March alone.

Decathlon and Go Outdoors will be targeting Halfords’ share of the UK bike market, undoubtedly with the side affect of eating into the aforementioned independent bike dealer’s share. A silver lining for the traditional bike shop for the time being is that these stores are not nearly as specialist in the plethora of services offered to enthusiast customers, yet.

Being digitally unprepared and disconnected

“The next battleground for the industry is digital and data”

I couldn’t really put Cube’s words any better than that. It feels like a poor description to call this one a trend, the march of the digital age is nothing new, but the sheer efficiency that information technology can bring to a business, from stock taking to logistics is now truly startling.

The bicycle business is playing catch up when compared to other industries, but it’s increasingly evident that those big players are both employing experts from outside of our bubble and investing heavily in connectivity and data tracking from the manufacturer’s production line right down to the after sales process.

From click and collect services through to supplier integration the retailer too should be looking forward to a more connected future. To give an indication of to what level of attention to detail the retailer of the future may place in digital, technology now exists to adjust price tags digitally via your mobile.

Stuck on the jargon? Here’s a handy guide for the less tech savvy.

The bike industry has long had a front line wage problem and to a certain extent, it’s self inflicted. As revealed in our Q3 Trade Journal, 23% of our pool of 74 bike retailers stated that real terms wage packets had decreased, while a further 47% said that there had been no change to pay in the past two years.

Sure fixing a BMX bike requires only basic skills, but anything above and beyond 20″ bikes has become ever more complex and integrated. Specialist investment is required, whether it be training or tooling.

Leading into our next topic of discussion, the bicycle business needs to present itself more like the automotive business. Consider whether you’re offering your customer the chance to haggle on price, or whether you have presented your pricing and indeed the labour required to complete a job. In short, is your store layout back to front?

Be proud of your training. Place certificates where they will be seen and think up an eloquent way to explain to the consumer that, no, that won’t “just take two minutes.”

It’s time we learned to value our skillsets and charge accordingly. How else will we attract talent that will naturally be drawn to higher wages in similar skilled industries?

The headlines have been coming thicker and faster, the car world undeniably has eyes for the bike market, in particular the segment that everyone agrees is growing – the e-bike business.

Primarily you might attribute this to “peak car“, a combination of the automotive world knowing that fossil fuel consumption’s days are numbered and cities become denser and busier spaces. Quite simply, the city is a funnel; cars are peas to your grain of sand bicycle and city planners the world over recognise this.

Whether it’s car makers integrating e-bikes and the charging of into their cars, buying chunks of bike share giants, taking a large presence at key e-mobility exhibitions or creating their own electric bikes.

Critics suggest that the auto-biz will never break the bike market, even that the technology and understanding of basic bicycle geometry is poorly grasped in the motoring world. They may also suggest that the eagle eyed consumer will know better than to splash out on any e-bike that doesn’t place the bulk of he weight low and central. But then again, the eagle eyed is not the demographic, nor necessarily the opportunity. 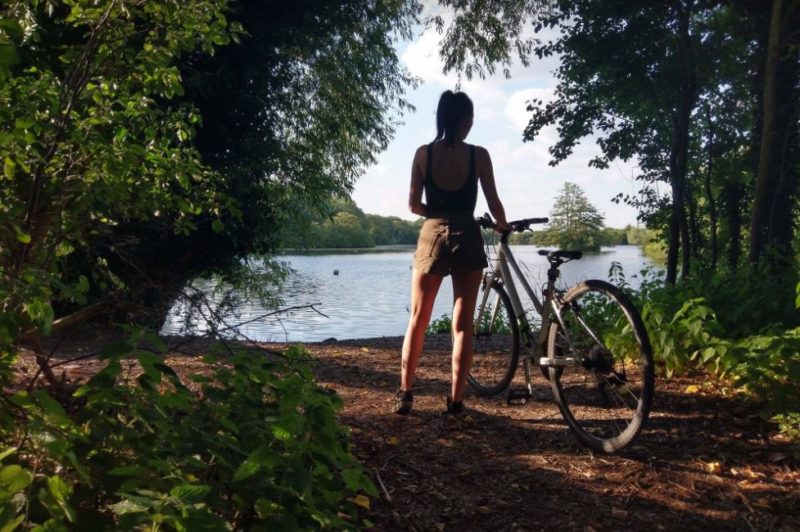 The bicycle industry’s greatest challenge in the next ten years will be to convert non cyclists to see the bicycle and electric bike as a viable transport option. That means our marketing must adapt its message and that those advocates fighting for space for cycling must be given our support. The road boom that sustained the bike business over the past ten years is sadly over. Mountain bike sales are bouncing back, yet while believed to represent around 30% of sales in the UK, can hardly be described as a having a steep growth trajectory.

Therefore the untapped demographics are the remaining opportunity. Though new and old threats exist, there’s reasons to be optimistic that there are enough customers in waiting to steer the bicycle business back to growth.

Have some thoughts of your own as to what the challenges and opportunities present over the next ten years will be? Let us know here. 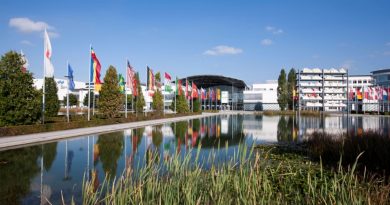 17 May, 2021 Mark Sutton Comments Off on Could IAA Mobility become Eurobike’s main rival? 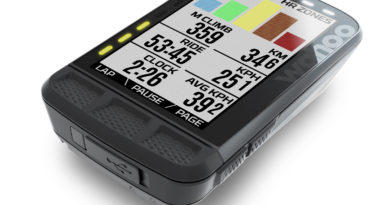 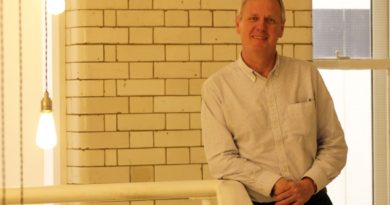